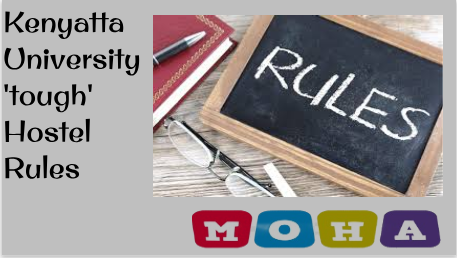 To ensure a smooth stay for every student at the Institution, the Accommodation Services Board has come up with the following rules and regulations:

1. The University reserves the right of room allocation. This is done for the few bed spaces available in the Institution based on a first-come-first-served basis for Continuing Students.

2. A room is allocated for One Academic Year. At the end of the year, one has to apply for another allocation. (However due to the Covid-19 pandemic and blended mode of learning, this particular rule has been abolished as students are expected to apply for rooms at the beginning of each semester.)

3. Any student with less than four units in a Semester will not be accommodated in the hostels.

4. Once allocated a room, the student will not be allowed to transfer or swop except on medical or other approved special grounds.

5. No refund will be given after payment. Any overpaid money will be carried forward or transferred to tuition.

6. Students shall be expected to share rooms, in addition to other facilities of common use e.g., wardrobes and reading tables. Those who refuse to share common facilities will lose their residence for the rest of their stay at the University.

7. Every student is expected to sign an inventory form accepting the responsibility of the condition of the room on allocation.

8. Students should clear from the hostel by signing out with the housekeeper at the end of the semester. A student who fails to clear and leaves their room locked will be surcharged Kshs.2500/= to cover opportunity costs. In addition, the room will be broken into to access the facility and any extra expenses incurred will be charged to the student.

9. No student will be allowed to remain on the campus as a resident during any part of the vacation without written permission from the University. Where such permission is granted, the student is expected to pay for his/her room in advance

10. Students involved in selling and also those involved in buying the rooms will be fined Kes. 10,000 each and be expelled from the room immediately. They will not be allocated a room whatsoever in the University until they have completed their studies.

11. Misuse and destruction of property in the hostels by a student or a group of students will constitute a serious offense, and the students or group of students involved in such an act will be charged for any damage caused.

12. Students will be responsible for the security of their property. The University will not be held responsible for the loss or damage to student’s property while in the halls of residence. Students are supposed to lock their rooms with a good padlock at all times and carry the key with them while in session

13. Cooking is not allowed in the rooms. It is not only risky to students but also to university property. Any losses or breakages will be surcharged accordingly. {This rule is most common in Nyayo Zone Hostels but a student is allowed to cook in other hostels}

14. Students found having made illegal electrical connections with the intention of tapping power will lose their residential status and be surcharged accordingly.

15. Removal of furniture and equipment from students’ rooms or any other part of the hostel, without permission from the head of the department concerned, is forbidden. It will lead to loss of residence for one academic year.

16. It is a serious offense for any student whilst in residence to organize or participate in any demonstrations or ceremonies for which permission has not been granted.

17. There should be no undue noise in students’ rooms and common rooms at any time as it disturbs students who want to study in their rooms. Students disturbed in this way either by the roommates or those in the neighboring rooms have the right to report the disturbances to the Housekeeper or the Night Attendant on duty immediately for appropriate action. Causing continuous disturbance will lead to the loss of one’s residence for the rest of one’s stay at the University.

18. Drunkenness, unruly or rowdy behavior within the halls of residence shall be considered an offense. Those charged with the offense of disturbing the peace in the halls will face loss of residence for the rest of the academic year.

19. Drinking in the halls of residence or common rooms is an offense. Those found doing this will lose their rooms for one academic year.

21. Threats, incitements, insults, and fights are offenses. Those found guilty will lose their rooms for the rest of their stay at the University.

22. No stickers or campaign posters should be placed on the walls of halls of residence. Costs of removing the same will be charged to the student concerned.

23. Male Visitors to the ladies’ hostel will be permitted between the hours of 10.00 am to 10.00 pm and vice versa. Those found violating these rules will lose their residence for one academic year.

24. Visitors must not be accommodated in the rooms overnight. A fine of Kes. 500/= per night will be charged to the hostee and the host. In addition, further disciplinary action will include loss of residence for the rest of the academic year.

25. Cohabiting is unethical and is prohibited. Those found practicing it will be expelled from the hostel.

26. Any student suspected of theft will face immediate expulsion from the hostels as well as suspension from the University pending determination of the case by the Senate Students Disciplinary Committee.

27. Proven cases of theft will lead to the non-allocation of hostel space in the future.

29. Students should, however, report all theft cases to the Directorate of Security Services rather than taking the law into their hands.

Failure to observe the above rules may lead to:

This was a complete list of the Kenyatta University hostel rules. For further reading, I recommend the following articles:

How Hostel Allocation is Done for First Years at KU

Bachelor of Information Technology (IT) at Kenyatta University