My sister joined Kenyatta University in 2016 to pursue a Nursing Degree.

However, the biggest problem she faced was the unavailability of relevant information online. Information like the admission requirements, fee structure, cluster points, intake dates, and co.

That is why I decided to write this comprehensive post regarding the Nursing Requirements at Kenyatta University so that comrades like you would get all the information you need in one place.

Nursing at Kenyatta University is offered on several levels: both undergraduate and postgraduate as explored below.

Related: How to Apply for KMTC Admission

If you scored grade D, D+ or C- in KCSE, you can explore other marketable certificate courses offered in Kenyatta University here.

Just like the Certificate, Kenyatta University also does not offer a Diploma in Nursing.

However, KU offers a chance to those students who want to upgrade their nursing diplomas to a degree. We will explore this in the next subsection.

Bachelor of Nursing at Kenyatta University

The Bachelor of Science (Nursing and Public Health) is a four-year program in Kenyatta University that trains students to be qualified nurses in public and private hospitals. The program is fully accredited by the Nursing Council of Kenya (NCK).

The requirement for doing this course is as follows:

This program is offered in two modes of study:

This is offered in 12 Semesters (which is equivalent to Four Academic Years) for direct entry into the Bachelor’s program. Graduates of this direct entry regular mode proceed to a one-year internship upon completion of their programs.

BSc. Nursing (School-Based program) is for students upgrading their diploma to a degree in Nursing. It is done in two and a half Academic Years and is subdivided into 8 sessions.

Units to be Taken

To be considered eligible for graduation, a student must take and pass at least 94 units as stated below.

HNS 317: Management in Nursing I

For those students who want to proceed to the master’s level, then continue reading below:

Master in Nursing at Kenyatta University is a two-year program, and it is done through course work, examination, practical assessment, and thesis.

Students choose their area of specialty from the following options: 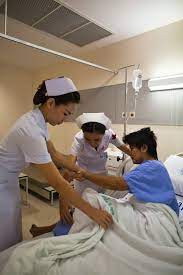 You can do nursing with a C+ grade in KCSE. You just need to get the required grade in subjects such as C+ in Biology, C+ in Chemistry, C+ in either Mathematics or Physics and C+ in either English or Kiswahili.

2. What are the Different Intakes in Bachelor of Nursing KU?

Bachelor of Nursing (Institution Based Mode) students are admitted in the months of April, August, and December. Otherwise, the students admitted through the KUCCPS program report usually in August or September.

However, the fee amount also depends on the mode of admission. This is because SSP and KUCCPS students do not pay the same amount. You can check your correct fee amount here:

That was the complete guide about the Nursing Requirements at Kenyatta University. Still got any questions? Let’s interact in the comment section.